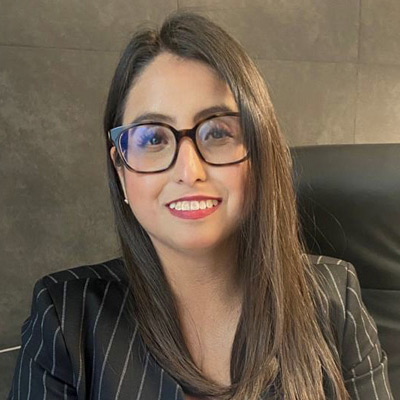 Graduated from Law School at the National Autonomous University of Mexico. She has a broad experience in various areas of Law, such as Corporate Law, Administrative Law, Foreign Trade and Amparo.

During her academic training at the Law School of the UNAM, she participated in the foreign trade summer project conducted by the then-president of the appeal body of the Word Trade Organization, whose acquired knowledge were strengthen by her residence at the General Foreign Trade Management of the Secretary of Economy.

Likewise, she relies on a wide base of theoretical knowledge in the areas of Bankruptcy Law, Energy Law, Maritime Law, Customs Law, Economic Integration, Dispute Resolution in the international field and consumer rights.

In 2018, she joined Kroy Abogados in the area of Corporate Law, where she is responsible for the company's corporate focus, which goes from the execution of minutes, granting of proxies, proceedings before Public Notaries and the National Register of Foreign Investment, as well as consultancy in various kinds of contracts.

Similarly, she has intervened directly in the promotion and follow-up of various writs of amparo, both in terms of management and hydrocarbon and economic competition.